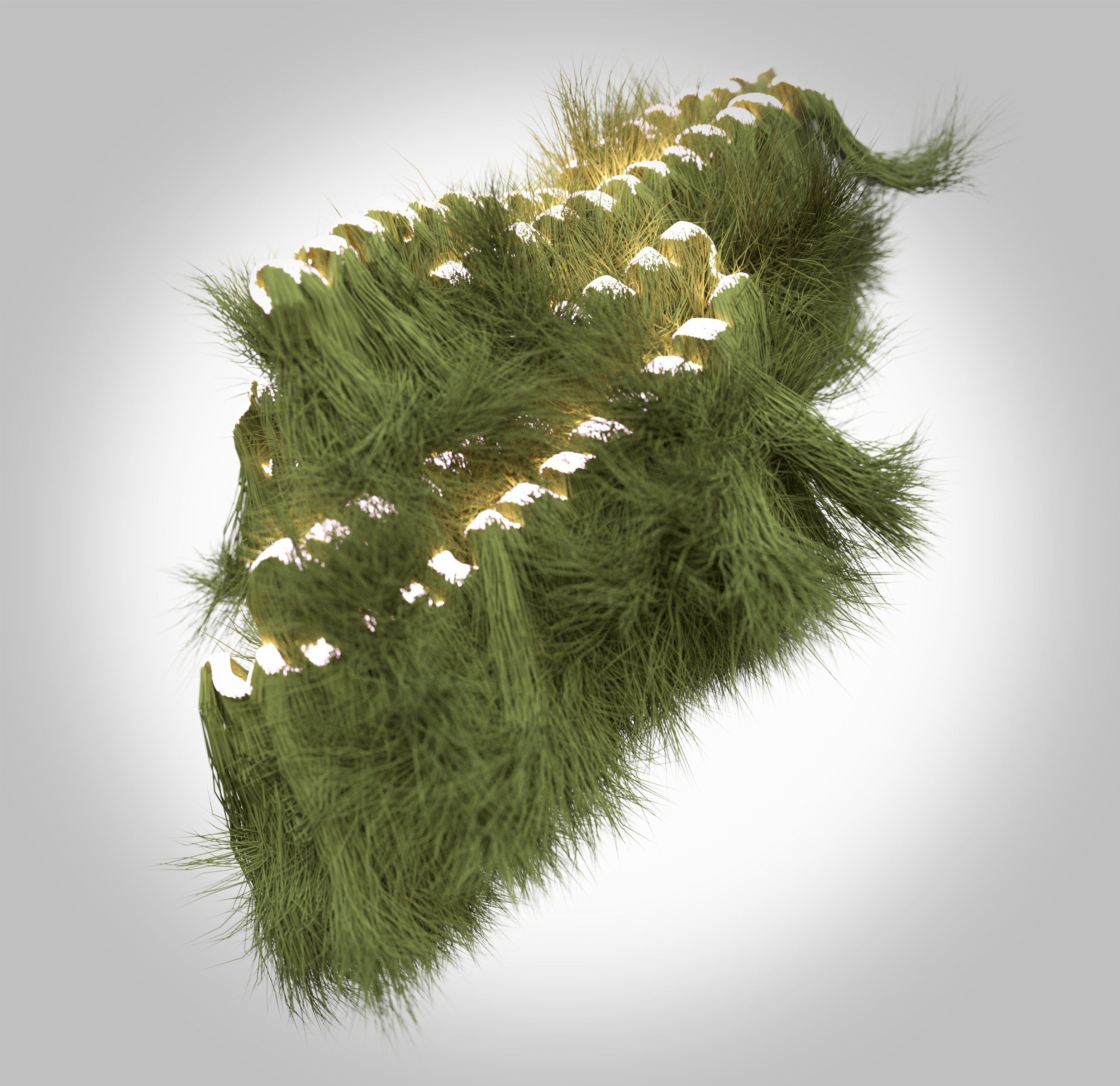 This image is based on a molecular dynamic simulation published in Pitt Biology Assistant Professor Jacob Durrant's paper  “Pyrite: A Blender plugin for visualizing molecular dynamics simulations using industry‐standard rendering techniques,” co-written with undergraduate researcher Nivedita Rajendiran, and created using CRC resources. The simulation displays a protein covered by bushy green hair that waves in response to the movement of the underlying protein, in order to demonstrate Pyrite’s ability to marry molecular dynamics and gaming graphics. View video of the hairy protein in action below.

Disclaimer: actual proteins with green hair don’t exist. Nonetheless, an image of the hairy protein became the cover art for the December 2017 issue of the Journal of Computational Chemistry.

The virtual reality goggles in the Durrant lab bring back childhood memories of watching cartoon slides through a Viewmaster. The world inside the goggles looks like a barren landscape until a magenta spiral floats into view.

From the world outside the voice of Jacob Durrant asks, “Do you see the magenta? That’s the insulin protein.”

Jacob Durrant’s research focuses on drug discovery. He is an Assistant Professor in Pitt’s Department of Biological Sciences (and a member of the Center for Research Computing’s Advisory Board and Hardware Committee). His lab develops software tools that blend existing molecular dynamics visualization software with imaging technology from computer games to create stunning animations, embodying physicist Richard Feynman’s quotation that Durrant often uses – “….everything that living things do can be understood in terms of the jigglings and wigglings of atoms.”

“Pyrite simplifies a molecular dynamics simulation by capturing the general gist of the molecular motions rather than every atomic detail. That reduces the required memory, allowing us to visualize the simulation in Blender,” Durrant explains. Dedicated analysis programs such as Visual Molecular Dynamics (VMD) consider every position of each atom, producing visualizations from dense clusters of individual atoms. Pyrite considers only select atoms and updates the atoms’ positions less frequently. It uses Blender to guess at the missing data so that that data doesn’t need to be stored in memory. Despite these simplifications, VMD and Pyrite/Blender visualizations are nearly indistinguishable.

Durrant’s recent paper was a tour de force for Pyrite, presenting cutting-edge research supported by simulations displaying a bit of whimsy. Published in December in the Journal of Computational Chemistry, “Pyrite: A Blender plugin for visualizing molecular dynamics simulations using industry‐standard rendering techniques” was co-written with Nivedita Rajendiran, an undergraduate researcher in the Durrant lab.

A standout simulation displays the movement of a protein covered on one side by bushy green hair – demonstrating Pyrite’s ability to marry molecular dynamics and Blender by making the hair wave in response to the movement of the underlying protein. The simulation is even set to music (“Disco Medusa,” by composer Kevin MacLeod).

Of course, actual protein molecules with green hair don’t exist. Nonetheless, an image of the hairy protein, created with help from graduate student Kevin Cassidy, became the cover art for the December 2017 issue of Journal of Computational Chemistry.

Another simulation displays a wriggling protein molecule embedded in real-world video footage of a ski lift. At first glance the protein is barely noticeable. The image is so well integrated into the scene that the protein casts a shadow at the same angle as the ski lift and trees.

The ski lift scene could be a computer game of “find the protein” – and that is Durrant’s intention. He believes hybrid videos such as this could be powerful educational tools.

He has an opportunity to explore that concept. Together with lecturers in the Department of Biological Sciences, Durrant was awarded a grant in 2017 by the Pitt Innovation in Education Awards Program, which funds creative teaching projects. His project – “ProteinVR: Micro and Structural Biology in a Virtual World” – develops and scales virtual reality tools for teaching structural biology and microbiology using web graphics and virtual reality headsets to explore three-dimensional microscopic systems.

Durrant’s team is building a web application demonstrating human biological processes at the molecular level. In one demonstration, the virtual view zooms from a standing human body, to the abdomen, to the pancreas, and finally to a simulation of an insulin protein.

ProteinVR will debut in an honors Biology class soon. The team eventually will evaluate ProteinVR with roughly 3,000 undergraduate students in classes ranging from basic to honors Biology. ProteinVR also will be used in the Department’s Outreach Program, which works with community groups and local educators to expose young people in the city to science.

Durrant is philosophical about developing innovations that could successfully contribute to cutting-edge drug discovery while also exciting students about proteins.

“You go into science because you want to have an impact on the future of humanity with some great breakthrough. I have high hopes that my lab’s research will have that kind of impact. But it’s important to remember that teaching contributes to that impact too, through the students you inspire and the good they do in the world as a result.”

Another simulation displays a wriggling protein molecule embedded in real-world video footage of a ski lift. At first glance the protein is barely noticeable. The image is so well integrated into the scene that the protein casts a shadow at the same angle as the ski lift and trees. First published in December 2017 Journal of Computational Chemistry. Reproduced courtesy Wiley publishing. Copyright 2017 Wiley Publishing.